For the second year in a row we are dealing with a cool wet spring.  Last year I tried to plant my squash “by the calendar” and suffered very poor germination and a slow start for the plants.  I ended up replanting twice before finally getting everything to germinate.  This year the ground was too wet to work when the “best plant date” on Nick’s seeding chart came and went.  With no chance of planting in the ground, I started the seeds in pots and placed the pots under the floating row cover I had over the beets and carrot seeded rows.  The row cover provided just the difference to help the seeds germinate nicely. 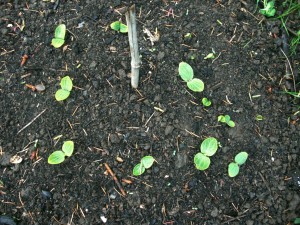 Eventually I was able to work up the ground for some of the squash hills.  Although a little late, I seeded the hills and placed row cover over much of them as well.  They are just popping up now, along with the confounding compost seedlings.  But I have my methods for detecting the interlopers.  I plant eight seeds in a hill in a  square pattern.  Can you tell which ones don’t belong?

Last year I had problems getting my beans started as well, so again this year I’ve been using row cover to help out.  As opportunity and conditions allow, I’ve planted the beans even though the soil has been on the cool and damp side of perfect for beans.  I had the row cover over the bush beans for a critical cool week as they were emerging.  Now it’s over the pole beans.  I’m growing a bunch of dry beans this year and really would like to get the plants established timely.  Usually I make my bean trellis and then plant the seeds.  This year it will be the other way around to accommodate the row cover.

With another cool wet week predicted, I’ll be leaving the row cover over those beans for a few more days. Meanwhile, the tomato starts are doing pretty well – weather considered. They seem to tolerate cool and damp better than they are often given credit for. The problem for the tomatoes is that they will not set fruit until the night temperatures get warmer. So, they too, would probably benefit from row cover.

Gardeners have many ways to offer up a bit of protection for their plants.  Hoop houses with plastic sheeting, bell jar cloches, walls-of-water, and full-blown greenhouses are different solutions to the same problem.  Row cover is the simplest and least expensive season extender and ought to be in the gardener’s tool kit, especially this year!