Part of the fun of beekeeping is that there is always a story to tell.  Often the story line doesn’t go as planned and the beekeeper (that’s me!) has to come up with a new plan on the spot.  My spring splits this year were a case in point.

Over the winter I lost one colony to some CCD-like problem — most likely involving Nosema Ceranea.  Of the remaining two colonies, one was healthy and one was suffering  from Nosema Ceranea, but still building.  I wanted to do a split from the good hive, so I was on the lookout for a source of queens.  Leroy, one of our local beekeepers, had ordered a bunch of Buckfast queen cells from Ontario to try to add some quality genetics to his bees.  There were a few extras and they were inexpensive, so I signed up for two cells. 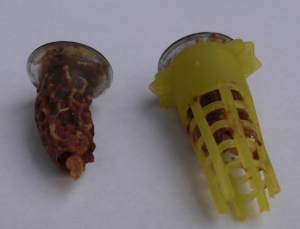 May 7: I made up two splits.  One was a nice five frame split out of my healthy hive.  This was to be the replacement colony and I wanted to give it a good start.  The other was three frames from the hive sick with Nosema.  This was the back-up.  I made the splits between rain showers in the morning and placed the queen cells between the frames later the same day.  After a couple of days I checked and, sure enough, both cells had hatched, with a nicely sliced hole and the trap-door still hanging from the cell.  I removed the cells, put the lids back on and waited for nice queen mating weather before checking further — everything going according to plan.

Come the weekend, after a nice potential mating day during the week, I went looking to see what I had.  In the big split I found my new Buckfast queen.  She looked nice enough except for her deformed wings that meant she could never fly on a mating flight.  I put the lid back on hoping that I would find good news in the back-up split.  Instead I found nothing.  Search as I might, there were no eggs, no queen.  But there were a couple of queen cells the bees had started on their own when I made the split, so I put the lid back on that one as well and pondered my choices.

I put in a call to my beekeeping buddies, to see if there were any other queens to be had.  Monday morning, Leroy called to tell me about a swarm call he had received, so armed with ladder and box of frames, I went forth to collect the swarm.  The report that it was ten feet off the ground proved to be wishful thinking.  The small swarm was a good twenty feet up in the branches of an old apple tree.  Some careful ladder work, acrobatics with a saw and a large tree branch, and soon the swarm was happily at home in the new box.

May 16: After bringing the swarm home, I went through the big split and found deformed wing queen and killed her.  Then I put a screen over the top of the split and placed the swarm box on top, giving them an upper entrance under the lid.  After a couple of days I removed the screen and everything has been great with that colony since.  As of today at the end of July it has filled two brood chambers, drawing half a dozen frames in the process, has a chock full super of honey, and is on its way to the second super.  That’s success!

Meanwhile…  there was the other split.  I should have combined it with the mother colony, but stubbornness prevailed, and I decided to see if I could do an increase this year and get a fourth colony going.  So patiently, I waited for the queen cell they had started to hatch out.  Around the first of June, with the main honey flow just around the corner, I checked the little split and lo– yet again the little queen had deformed wings!

Now surely, you say, its time to throw in the towel.  But at this point, the effort had some inertia that defied reason.  A rainy week eventually relented and on June 7 I found I nice full frame of brood and eggs from my strong colony to give the woeful split its final chance.  The bees built a single nice queen cell on that frame.  Again, I had a patient wait for the cell to hatch.

When dealing with queenless colonies, I always listen closely to the hive.  When the bees are truly desperately queenless, they are distressed and you can hear it in the dull roar the bees make when you open the hive.  To get the best audio fidelity to make the queen / no queen judgement, I don’t use smoke when opening the colony.   If the bees have a queen cell or a virgin queen in the hive, they are content.  Once the virgin queen hatches and she is about on the frames and not yet mated, she can be very hard to find.  Since the colony has been without a queen for quite a while,  there are no eggs or young brood.  This is the time when the sound of the hive is the best indicator of trouble or not, even if you can’t find the queen. 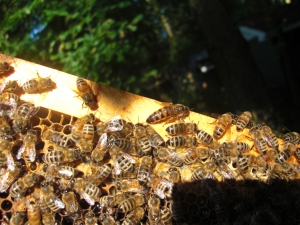 June 27:  Finally the little split had a nice new queen.  She was laying within a week, filling lots of empty holes with eggs.  No fancy Buckfast genes here, just the best my little apiary could provide.

She has her work cut out for her, building the little split into something that might survive the winter.  I’m going to have to build some better top and bottom boards for colony number four.  Right now it seems like it was worth the effort.  We will know that for sure if it is still a going concern next March.

By the way, the Nosema problem in the mother colony has abated with the coming of the honey flow.  No doubt it is still present, but you would be hard-pressed to know there was anything wrong just from outward appearances.  So what should I do to prepare the potentially sick colony for the winter, folks?