Over the years I’ve developed a fairly well-oiled backyard-beekeeper honey processing operation.  That hasn’t come without a few disasters along the way. There are lots of places for things to get messy, starting with removing the honey from the bees, and ending with putting the label on the last jar.  In between, there is potential for stings, hordes of bees in the house, gallons of honey on the floor, broken jars, or just sticky doorknobs everywhere.  A successful extracting day just means it was relatively uneventful!

Step one is to separate the honey you want from the bees.  There are lots of approaches, including bee escape boards, chemical fume boards, and shaking and brushing.  I forgo those methods and instead blow the bees out of the honey supers with my air compressor.  I remove the honey supers and replace the cover on the hive.  Then I stand the super to be cleared of bees, on end, on top of the hive with the top bars toward the rear, where I work with the air compressor.  I blow the bees forward out into the air in front of the hive, where most of them turn around and come back in the entrance to the hive.  After a few minutes, the super is largely clear of bees so I quickly move to the side and cover it to prevent the bees from returning to it.  Then I do the same with next super until they are  all done.  I may give them all another go with the air once they are removed from the vicinity of the hives to get them really clean of bees.  I usually take the honey off sometime in August, yet never seem to get the opportunity to extract until the middle of September.  This year was no exception, so the honey has been sitting in the garage for the last few weeks.

The key piece of equipment for extracting honey is, of course, the extractor.  I picked up a third-hand four-frame home-motorized extractor from a beekeeper friend about fifteen years ago.  With a little TLC, a nice new table for it, and a little monkey business with a washing machine motor, I have a serviceable piece of equipment.  The motor has a “wash” speed for turning the heavy frames, and then a “spin” speed to clean them out. 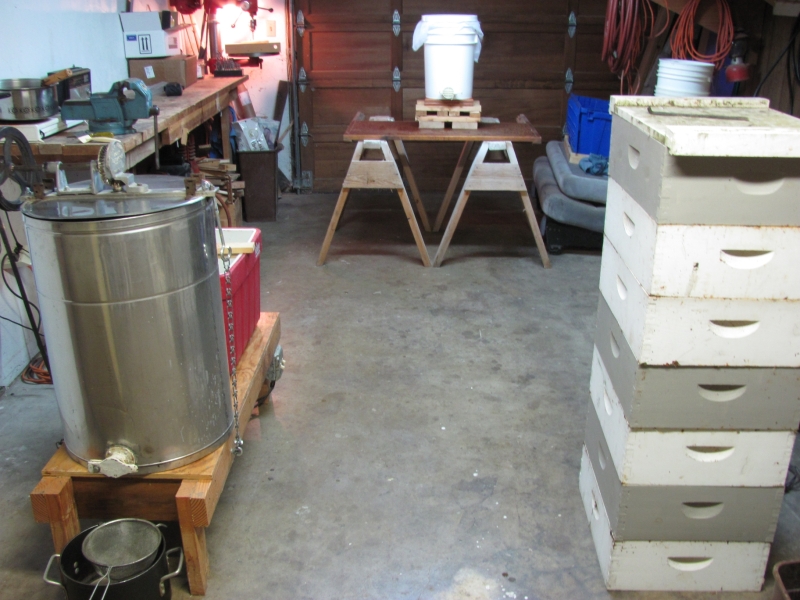 Besides the extractor, I have an uncapping tank made from an old plastic cooler with a piece of 1/4″ hardware cloth in the bottom so honey can drip out of the cappings.  I also have a honey strainer and bottling tank made from a five gallon plastic pail with a honey gate on it.  I use a yard of fine mesh fabric for the filter and hold it in place with the bucket lid that has a large hole cut in the center to dump the honey through.  When the honey comes out of the extractor, I first run it through a sieve to remove most of the cappings which will tend to clog the filter cloth.

The process will go much quicker if you remember to place a 75-watt light bulb under the stack of honey supers the night before extracting day.  A little warmth goes a long way to get the honey to move, but 100-watt bulbs are known to melt comb, so be careful. 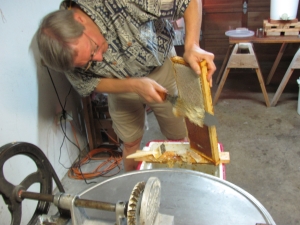 My uncapping system is still a bit primitive.  I just have a simple uncapping knife that needs to be heated in a pot of hot water.  A hot plate on the work bench keeps a water pot hot for that purpose, and also gradually warms up the whole operation.  I uncap right on top of the cappings bucket.  My technique is to cut from the bottom using short sawing motions while working upward with the hot knife.  By tilting the frame over the bucket, the cappings fall away from the frame as you go.

Four frames at a time, the honey goes into the extractor for a spin.  I reverse twice, and only run at high speed on the light frames.  The motorized extractor lets me keep the bottling operation going while the next load spins.  After a session with the uncapping knife, I stop at the clean-up bucket to wash my hands.  Keeping the final product clean requires the diligence to clean up every drop of honey that spills. 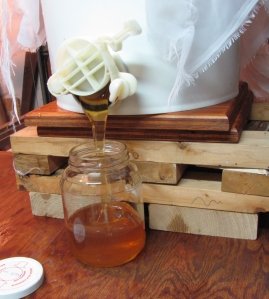 Most of my honey ends up as gifts or barter, so I just use whatever jars I can find.  Several friends save jars for us all year, and by the time we are ready to extract, there are copious bags of jars of all sizes for the crop.  It’s a job in itself to remove the old labels from the jars, to wash them and match up the lids.  Ellen and friends helped out with this process.

The spun-out but wet honey supers need to go back on the bees so that they can clean them up before I store them for the season.  The bees are a bit crowded now, so if I just place the supers directly on top of the hives, it’s often difficult to get the bees out of them again, so I place an empty box between the brood chambers and the wet honey supers.  In a few days the bees have done their job, and I can remove them totally bee-free on a convenient cold morning.  Clean comb, never brood-filled,  is the best prevention against wax moth damage during storage.

There are numerous times when your bees could discover your honey or your processed supers, and fill the garage up with bees in a matter of a few minutes.  I think all beekeepers have this happen to them once before they realize the vigilance that is required to keep the bees out of their honey!

When the strainers slow down and you have a big jar to fill, there is the temptation to leave it filling while you do something else.  Inevitably this leads to quarts of honey on the floor!

Younger helpers have been known to leave every single jar of honey with a nice sticky film.