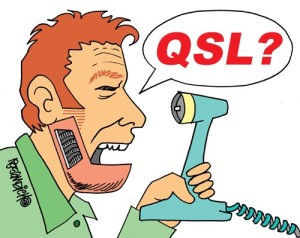 Broadcasting’s use of abbreviations and obscure notation started with the original radio-men, when every character required some pain to transmit.  Today’s tweeters and texters have invented their own slang for much the same reason, but without the long linguistic history that accompanies radio lingo. When you first enter the ham world, you have to cross the language barrier, even if it isn’t particularly high.  You turn on the radio and connect to the digital stations and immediately see CQ CQ CQ DE K7BT K7BT PSE K streak across the screen, highlighted in red.  What can that mean?  Here is a translation and lexicography of some of the more interesting bits of ham lingo in no particular order, but starting with the message in red.

CQ –  “Calling any station”  comes about from the sounds of the letters C and Q spoken in French, and meaning “sécurité”, here translated roughly as “attention.”  This is the universal “all call.” When my digital radio program sees CQ it turns the line red to alert me to the call.

DE – “from”  from before English was the lingua franca,  often followed by the sender’s call sign as in our message above.  Usually the call sign is repeated more than once for clarity.  This universal calling convention, along with call-sign naming conventions, allow automated listening programs to pick out a station’s origin from the jumble of text being received. The very useful program PSK Reporter utilizes this convention of ham lingo to amazing effect.

K7BT – a call sign, one of millions, the unique moniker of every amateur operator.  The characters before the numeral are unique to the country granting the call sign.

PSE – “please”  when every letter costs a good fraction of a second, you abbreviate everything.

K – “done transmitting – your turn – go”  This is a curious one, since I can find barely a reference to it anywhere in the simple form of ‘K’.  It seems to be so ingrained as a form of “over” that it goes without saying in the ham lingo guides.  Its more formal cousin, “SK,” derives from the obsolete American Morse Code sound-alike for the Western Union code “30” which means “No More (end).”  Shortening the very final “SK” to simply “K” seems to imply that this is just the end for now,  your turn.

SK – “The End, No More, All Done” when the receiver should not expect another response from you.  Derived as described above, but this term also has another meaning.  SK is also short for  “Silent Key,” meaning an operator who has passed away.  After all, the “silent key” is indeed “no more – all done.”

73 – “best regards” is another of the Western Union telegraph codes that migrated into the ham world.  Not to be confused with its cousin…

88 – “love and kisses” – Western Union again.  This is would be a nice way to end a message to your YL or XYL.

YL – “young lady” or just about any woman, young or old, unless specifically your XYL.

XYL – “wife” as in ex-YL.  If you think that too denigrating, the guys don’t have it much better.

OM – “old man” is just about any operator that is not a YL.  If you found that funny, you could laugh like a ham.

FB – “fine business” — Really?  who says that?  Everyone if you are a ham.  But I think it translates better into “fabulous” or maybe just “ok.”  Ambiguity continues with…

TU – “thank you” obviously, but less obvious when …

BTU – “back to you” is another form of “over.”  So it seems like TU should just be “to you” as in sending “30W TU.”  Am I thanking him or am I sending him my transmitting power – or both?

TEST – “contest” because one of the major pastimes of amateur radio operators is spent “contesting” for more contacts.  It took me a while to realize that the ham sending CQ TEST wasn’t after help to fix his equipment.

DX – “long distance” usually outside of the country of the broadcaster.

There is an entire set of Q-codes.  These codes seek to have specific meanings and can be questions or answers – pretty handy when it comes to reducing typing!

Not surprisingly, the Q-codes have lost their verbish nature and become nouns as well.  QSL becomes the acknowledgement and can have physical form in a QSL card, commonly sent in the mail to confirm a radio contact. QSO is the contact, not the process of making a contact.

The more difficult and time-consuming it is to send characters, the more one sees the use of ham abbreviations.  My experience has been mostly with the PSK digital modes where characters are transmitted at roughly my typing speed, so extreme abbreviations are not really necessary.  Inexperienced Morse code operators may be only able to punch out 5 characters/sec, so speaking in sentences is prohibitive.  The RTTY digital mode also has its own form of rapid fire idiosyncratic exchange syntax that I have yet to master completely.  The RTTY experts seem to relish making an exchange of call signs an information take no more than a few seconds and then moving on.  Despite the common tendency for transferring only the most basic information very quickly, if you spend some time and practice a bit of verbal diplomacy, you can discover that there are real people with real personalities on the other end of the connection.