Of all the grain crops, amaranth has to be the easiest to turn into something that you can eat.  If you have ever wondered how to add a cereal crop to your garden, consider amaranth.  This versatile, beautiful, and easy to grow plant can add another dimension to gardening.  Unlike wheat or oats, where you need to cut the stalks, thresh the grain and then grind it into flour, amaranth literally falls from the seed heads ready to eat.

I started this experiment last year with a small test crop just to get an idea of what to expect.  Andrew Still of the Seed Ambassadors spoke highly of amaranth and gave me a few seeds of Copperhead, an ornamental yet grain producing variety.  There are two or three species of grain amaranth, Amaranthus caudatus, and Amaranthus cruentus (Copperhead is this species) being the most important, each of which encompasses many varieties.  Most of the amaranth varieties have purple or red hues in the plant stalks and leaves as well as brilliantly colored flowers.  Copperhead is an exception with rust and copper tones in the stems and flowers.  The common commercial variety called Plainsman is a hybrid of two other species,  Amaranthus hypochondriacus, from Mexico and Amaranthus hybridus, from Pakistan.  Plainsmen is a recent development initiated at the Rodale Institute and completed at the University of Nebraska to develop a high-yielding crop suitable for mechanical harvest.  A good discussion on the potential of amaranth as a commercial crop can be found at the Purdue University NewCROP website here.

Last year I started a few seeds indoors and set out the seedlings far too close together for the size of plants that were to come.  Despite the crowding, and half the plants in pretty deep shade, the flowers were magnificent and I got a couple of cups of grain.  This year, forearmed with a little bit of knowledge, and looking for a more significant crop, I committed the parking strip along the street to amaranth.  I was intending to sow directly this year, but when planting time came the weather was still cool and wet so I again started plants inside.  The bottoms of two milk jugs as flats produced about 150 seedlings.

I planted the the bed in about three rows a foot apart with 1 to 2 feet between plants in the rows.  Most of the seedlings quickly became established.  The photo shows the bed in the middle of July, about five weeks after transplanting.  I did weed the bed a couple of times.  Once the stand became established, in August, I seeded a bit of crimson clover under the canopy to try and get the eventual winter cover crop established early.

Like many of the more vigorous growers, amaranth is a C4 plant with an advantage in efficiency of photosynthesis.   Amaranth is closely related to pig weed, so it’s not surprising that it grows like a weed!  A volunteer sunflower came up in the patch and the amaranth grew almost as fast as the sunflower. 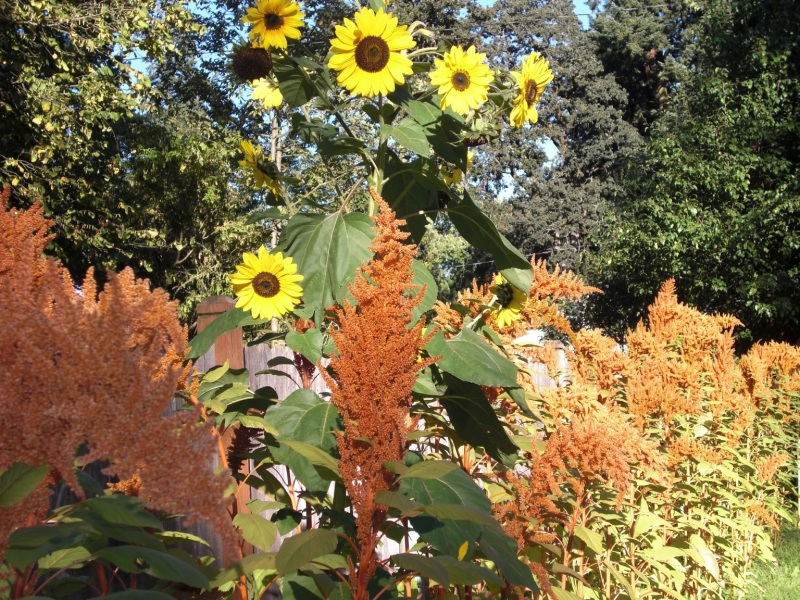 By the end of September the seed heads were filling out and getting heavy.  Amaranth easily gives up its seed.  You can test the flowers just by gently rolling them in your hand.  If the seeds are ripe they will fall into your hand.  Despite the apparent fragility of the flowers, the seed heads don’t seem prone to shattering.  This year, as with everything else, fall came too quickly and the seed heads on the shady end of the bed never got fully ripe before weather dictated harvest time.

I harvested the grain by gently bending the seed heads over a screen placed over the wheel barrow.  I then vigorously rubbed the the flower heads with my hands as the grain sprinkled through the screen.  The screen of 1/8″ hardware cloth would catch most of the large flower parts that were dislodged.  This process is relatively gentle to the plants.  I was hoping we might have a long dry fall and I would have a chance for a second harvest, but that didn’t happen this year.

I transferred the contents of the wheel barrow to a five gallon plastic bucket.  I used a small fan to winnow the fresh grain from the flower fluff that comes along with the grain.  Slowly pouring the grain from one bucket into another in front of the fan, most of the fluff gets separated from the grain. Winnowing does a good job with amaranth because the seeds are dense and compact compared to the flower fluff.  After the seeds had dried a few days, I screened everything through window screen.  When the seed is fresh it will not fit through the window screen mesh, but it does once it loses some of its moisture.  It’s important to keep the grain clean throughout the processing steps.  Fluffy stuff will get winnowed away, but bits of dirt will remain with the seed.

The fresh grain contains a lot of moisture and it must be dried down.  I spread the grain thinly in my plastic buckets and turned it frequently.  The harvest shrinks as this process continues.  What started out as almost a five gallon bucketful of grain and fluff has turned into just three quarts of grain for my efforts.  I was hoping for more, but this will still yield a few good breakfasts through the winter!  Actually my harvest is not too far from amaranth expectations.  The literature suggests yields around 1000 lb./acre can be expected. I have 5-6 lbs. from about 180 sq.ft. which translates to about  1300 lb./acre.

As usual, I’m already planning the next phase.  Perhaps next year I’ll plant a little more, it will be warmer, and I’ll get a bumper crop.  I have some grain amaranth that I got at the natural food store that I am curious to plant as well.  It’s probably Plainsman; it would be an interesting comparison.