This story starts a few years ago when I picked up a few pretty bean seeds at a seed swap.  They were colorful oval beans with maroon and white splotches and were labeled as pole “pea beans.”  Three years ago I planted the seeds and discovered a bean with a very vigorous habit, happily bounding the poles and climbing into a nearby tree to produce copious medium-sized crescent-shaped pods.  As a fresh bean they are nothing special, but as a dry bean they excel, producing a bountiful crop that dry on the vine before the rains come, and a tasty bean as well.

Curious about their pedigree, I looked up “pea bean” on the internet and discovered a similar shaped red and white been popular in the UK that went by that name.  I also discovered that these “pea beans” were considered to belong to the species Phaseolus aegypticus rather than  our common beans Phaseolus vulgaris.  My beans didn’t look exactly like the UK pea beans, but I was willing to accept that they were similar enough to provide them with the aegypticus label at last year’s seed swap.  However, Andrew Still of Adaptive Seeds was skeptical that they were really a different species.  I had used these beans as a “separator” between my Oregon Giant and Kentucky Wonder pole beans, since if they were a different species they might reduce crossing between the other beans from which I save seed.  Beans are self pollinators, setting seed before the flowers even open fully.  They are resistant to crossing, but determined insect pollinators can sometimes produce crosses anyway, and I have a lot of bees in the yard.

The tunnel of beans has worked out quite well this year.  With the recent spate of fine weather, the beans were getting nice and crispy, so I was picking the dry ones a couple of days ago.  These beans really are quite pretty.  Mostly they are cream-colored mottled with maroon splotches, but sometimes they are reversed and are mostly maroon.  Usually the dark ones are all in a pod, but sometimes, as in one in the picture, there are both colors in the same pod. (click on the pictures for a better look).  On the vine, the beans that have yet to dry are fat little pods with a pronounced crescent shape. 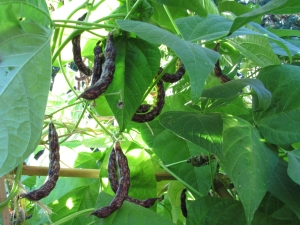 I made a more determined effort to identify them recently, and I learned a few things.  First, the Wikipedia page for the “pea bean” had disappeared with this explanation. (1) There’s no source which confirms that ”Phaseolus aegypticus” is a valid botanical name. (2) What evidence there is suggests that the ‘pea bean’ is a cultivar of ”P. vulgaris.”  It looks like Andrew was right.

So I was back to hunting for dry pole beans that looked like mine.  I’ve come to the conclusion that what I have is most likely a variety called Gramma Walters, considered an excellent pole dry bean for this area.  Another variety with  similar characteristics is the Stortino Di Trento Marbled Anellino Pole Bean.  The Anellino Italian varieties are noted for their crescent-shaped pods. My suspicion is that the Gramma Walters developed her bean from the Italian varieties.

[Update 8/5/12 — Andrew Still of Adaptive Seeds showed me some Echte Kipfler, meaning “Genuine Crescent” beans that are most certainly the source of my pretty maroon and white beans.  Andrew found them in Austria on a Seed Ambassador mission.  He gave some to Alan Kapuler of Peace Seeds who grew some out and brought them to the seed swap where I found them.  Surprisingly, in Austria they are sold as a pole snap bean rather than a dry bean.  To my taste they excel as a dry bean but are rather coarse in texture for a snap bean.  So Gramma Walters is really Echte Kipfler in what follows…]

You may think that the mystery is solved now that we have named the mysterious beans, but it is just beginning.  What should I find when picking the dry beans, but a beautiful bunch of black beans.

The beans pictured all came from one plant in the midst of the planting of Gramma Walters beans.  I certainly don’t remember planting any black beans!  These are likely the product of a cross with either the Kentucky Wonder or Oregon Giant beans that I had in the same row last year.  So how do you get black beans from a combination of Gramma Walters with, I suspect, Kentucky Wonder?   There’s the mystery!  Besides appearing to be a beautiful and productive black bean, the pods were all completely dry, a good 10 to 20 days earlier than the others.  This is a good trait for a dry bean!  Should I grow these out and see what happens next?

Bean seeds are the fertilized embryos for the next plant generation, and they are also the product of the mother plant.  To understand what is happening with bean seed color, we first have to realize that the seed coat is entirely the product of the maternal genes, even though the contained embryo includes the genes from both the ovum and pollen.  Hence, seeds of a crossed pod will appear the same as that of normally self pollinated pods.

The prospect of trying to grow out a new variety is exciting, but also got me thinking about the genetics of natural inbreeders.  Beans happily pollinate themselves, so they quickly develop a highly homozygous genetic composition after a few generations of inbreeding.   When you cross two bean varieties, you are making the classic F1 hybrid, where all of the offspring of the cross should look fairly similar, since they all get approximately the same genes from each parent line.  So, if my black beans were from the Gramma Walters / Kentucky Wonder cross, I should be able to replicate pretty much the same thing again by hand pollinating the immature flowers before self pollination happens.  That’s one experiment I can try, to see if my understanding is correct, and if I can indeed replicate this event.

The black beans, which are the hybrids, must be heterogeneous in many traits, since the parents are so different in appearance, and they have genes from each parent.  These self pollinated beans will have many random combinations of the heterogeneous pairs, so they will produce the F2 generation with a large degree of genetic variation from plant to plant.  If I plant the black beans, I should get everything from Gramma Walters to Kentucky Wonder and everything in between in the progeny.  There might be a few black beans in there as well that I could select for the next generation and would come a bit truer to the parent.  The path might be a long one to get my black bean to come true enough to call it a new variety.

For the home seed-saver, this line of thought brings up an interesting conclusion.  The real problem for maintaining varietal purity is with contamination that goes undetected in the F1 and ends up contaminating the seed, especially in the F2.  Hence, a distinct seed color change is a good thing if we want to avoid contamination (since it is easy to remove black seeds from red ones).  If you were growing beans where you couldn’t easily tell the crosses apart in the F1 seed, those seeds could result in a hidden impurity in the saved seed with much less obvious ways to cull it out.