When I first started playing ham radio, I ran across the GR5V antenna. It seemed that a lot of folks had them, and there seemed to be a fair bit of controversy about how good/bad they were. For whatever reason, I bypassed the design and went to an off-center-fed dipole instead. Now with more experience modeling antennas under my belt, it seemed like time to revisit the GR5V and try to understand what it can and can’t do.

I started with a trip to Wikipedia to get the recipe:  The length overall of the main wire, LOA, the  electrical length of the matching section, ELLL, and the impedance of the matching section, ZLL.  Just these parameters, with the feed point in the middle of the wire, define the GR5V class of antennas. The basic idea of the G5RV is a balanced 80m half-wave resonant antenna with a section of high impedance line at the feed point to aid in matching the antenna to the rest of the coax transmission line to the source.  I built the model in 4NEC2 and ran some frequency sweeps using various parameter sets from published sources and some of my own.  In the figures below, the close-spaced markers show the amateur radio bands.

Here is KE5KJD’s version of the GR5V which does a little better job on both 40 and 20 m bands.

You can see that small changes in these tuning parameters can make large changes in performance.  Below is a version that I came up with that emphasizes 80m and some other bands but sacrifices 40m.

There is another variant of the GR5V, namely the ZS6KWB antenna.  Thanks to Rick, KC8AON, for pointing to this article ZS6BKW vs G5RV compiled by Larry James LeBlanc for the AARA Ham Club. This is a very good reference, and provides a good check of my results.  So… seems like a good idea to model the version of the ZS6BKW in this reference. (You can find half a dozen slightly different variants of the ZS6BKW design if you look over the internet.)

In all of the above cases, there was 50Ω cable between the matching ladder line section and the 50Ω transmitter.  The nice thing about a cable matched to the source is that the cable length doesn’t matter; it always looks exactly like the matched source impedance to the load. But that fact removes one potential tuning variable, namely the length of the cable from the source to the ladder line section if the cable is mismatched.  So lets see what we can do using 75Ω cable.  We can only expect marginal improvement (or deterioration) in performance since 75Ω is quite close to 50Ω, but can’t hurt to try.  For instance, in the GR5V-AF7NX version above, the 15m band needs “touching up”, so I’ll optimize for improvement there.

We can try the same approach with the ZS6BKW, this time looking for any improvement we can get on 80m.

Using 32 m of 75 Ω line and raising the antenna up to 20m indeed improves a little the 80 m resonance. Maybe it’s worth it.  Using RG-11 for the 75 Ω line you could probably work the bottom half of 80 m with acceptable line losses as well as the other ZS6BKW bands.

Curiously, the GR5V-ZS6BKW optimization and the GR5V-AF7NX optimizations are complimentary in that they fill in the missing bands for each other.  Put them both up!

The 4NEC2 source file is here for those who might want to try their own optimizations: GR5V_NEC_MODEL

One attraction for the GR5V  and ZS6BKW is that they are symmetrically fed antennas.  This implies that because of the natural symmetry, there is nothing to drive unbalanced currents on the feed line.   In the model I include a wire that goes straight to ground connected to one side of the coax where it joins the 300 Ω section.  This represents the outside of the coax and will show the common mode RF currents that you would rather have stay out of your shack. The ladder line section, being built of 4NEC2 ideal transmission line, is by definition, balanced.  Think of this model requirement as having a 1:1 balun at the coax junction.  Below you can see the current magnitudes on the wires as the red lines. 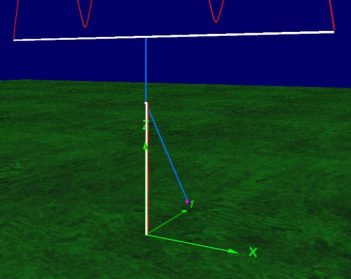 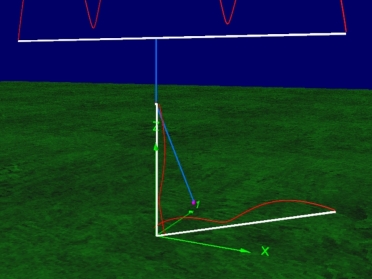 Everything is balanced in the case on the left, and the current is very small.  However, if there is a telephone wire or a fence that interacts with the antenna, then like in the second example above, the system will no longer be balanced and common mode current will flow down the feed line as nature see’s fit.

Finally, lets take a look at the 20 m radiation pattern for the GR5V. The model was run with the antenna up 20 m.

There are four strong low angle lobes at about 45 degrees from the wire.  Compared to my OFCD, the pattern seems excessively concentrated in the four lobes with rather larger separation between them.  The gain in each lobe is a solid 8.5 dBi, so if it is aimed in the right direction, it will perform nicely. However, given the limited number of bands a particular tuning will cover (4 or 5),  I will stick with my OCFD which gets ~7 bands.